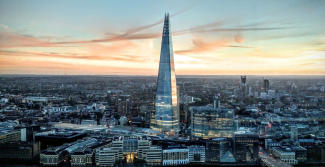 In 2018, we set out to create the largest ever time-lapse photo of London. Working in partnership with Nikon and virtual reality studio Visualise, our gigapixel time-lapse panorama of London’s skyline is truly a sight to behold.

The photo was taken from the roof of Canary Wharf’s One Canada Square. The incredible detail captured in the image allows you to zoom into the streets of London through a full 24 hours, from the early morning glow over the Big Smoke to nighttime in the capital.

A total of 6,240 photos were taken over 24 hours to capture a 155-degree view of the city. The images were then expertly stitched together to create this amazing gigapixel image. Every hour, 260 photos were captured in the same pattern to create a cohesive final image.

The team behind the spectacular photo was a Nikon D850 camera and a Nikon AF-S NIKKOR 300mm lens. But the gigapixel technology, combined with the sheer magnitude of the photo, made this a challenging task. Visualise used a robotic head, custom made for the image, which is usually reserved for film production photos. This enabled the team to repeat the same pattern of images.

Henry Stuart, the talent behind the camera, told the Evening Standard: “We needed a head that was heavy enough to mitigate the wind shaking the camera, and accurate enough for us to stitch the images together in exactly the same way for all the images. Even we were surprised by its accuracy.

“Each panorama is so large it needs specially built computers to process it. In this case, we had to build a special serve system and network all of the computers in our studio to receive the content, to stitch the images together.”

Marvel at the UK’s capital city captured as it’s never been captured before. We hope you enjoy e-wandering through the streets of London!