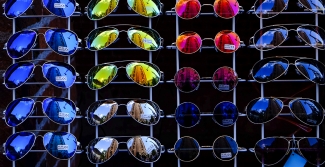 Most iconic sunglasses through the decades

by Steinar Engeland on Unsplash

Fashion can change in the blink of an eye. What was all the rage this time last year is now long forgotten. For sunglasses, this ever-changing nature of what's hot and what's not is just as apparent - each decade has brought a new style of shades. Not only do they protect your peepers from the sun's harmful UV rays, they can also make a statement, acting as a bold expression of your fashion sense. For many, they can add a glimmer of glamour to your look.

Photo by Amadeo Muslimović on Unsplash

Before WWII, sunglasses were typically only mentioned in the context of sport, work or eye protection and were normally always worn by men. The Great Depression meant that people weren't as able to splash the cash as most of the western world is today. Although Hollywood stars initiated the trend in the 1930s, sunglasses only became commonplace in the late 1940s. Until then, thick round frames made with light coloured plastic were popular, contrasted with dark lenses to create a ‘bug eye’ look.

Photo by Viktor Juric on Unsplash

As the years rolled on, designers started to experiment, and the shapes of sunglasses began to evolve. During the war, the iconic aviator style of sunglasses became a typical piece of military gear after thousands of aviation workers were given their own pair to protect their eyes whilst flying. They then became a big hit for men's sunglasses fashion.

Towards the end of the 40s, mirrored lenses were incredibly popular, blocking 30% more harmful UV rays than the standard tinted lenses. Hollywood stars were understandably more interested in the fact that mirrored lenses helped them hide from enthusiastic fans and paparazzi.

In the 1950s, former president John F. Kennedy rocked the Wayfarer, which remains a modern favourite. Sometime later, when Marilyn Monroe starred in the classic 1959 film Some Like It Hot, designers everywhere were inspired by the cat-eye shades she wore on set. This feminine style remained a big hit throughout the 60s. Even now it's as popular as ever and can be found in all sorts of colours and sizes.

Photo by Tiko Giorgadze on Unsplash

The rockers of the 1970s, such as Jimi Hendrix and John Lennon, made round tinted lenses iconic. As travel became easier, fashion in the 70s had a more international influence. Along with tight, stretchy clothing made of polyester, oversized square frames ruled the dancefloor during the disco era, especially in vintage bronze or gold.

Photo by Nathan Dumlao on Unsplash

During the 1980s, the world experienced an economic boom and people began to use designer brands like Ray-Ban. Fashion seemed bigger and bolder. The classic aviators reappeared thanks to the likes of Tom Cruise and Starsky and Hutch, although they will always remain an emblem of military gear for the U.S. armed forces. King of Pop, Michael Jackson, also wore the futuristic shield-style shades that you often see on Kanye West nowadays.

Photo by feliperizo.co | heart made on Unsplash

Where the 80s were abundant with excessive consumerism and extravagant bright colours, 90s fashion was relaxed and low key. Sporty, wraparound style shades were handy for cyclists and tennis players and small round and oval frames were made popular by the Olsen twins.

Recent style trends are proof that fashion is a repetitive cycle. We tend to adapt old looks and give them a modern twist, in order to remain up-to-date and innovative. Today’s trends of sleek hexagonal frames and mirrored lenses are cropping up all over Instagram. Perhaps it’s only a matter of time before the return of the cat-eye sunnies.