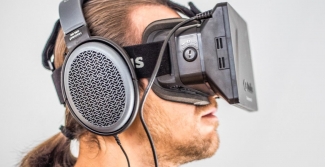 Take a second to picture this: the year is 2434, and the world is a landscape of skyscrapers, robots and hover boards. Humans are walking around in a zombie-like daze, absorbed in something only they can see. This isn’t a scene from “28 Days Later”, and neither is it the plot of a horror film; as scientists are developing the means to exploit augmented reality commercially, it may not be long before science fiction becomes a part of our day to day life.

“Call of Duty” and the like have captured the heart and leisure time of many a gamer for a long time, but video consoles may soon become a thing of the past. Researchers and engineers are developing ways to integrate computer graphics into real-world surroundings, enhancing them with sounds, visual effects and even smells. Imagine pressing the “Start” button on your controller and plunging into an otherworldly, lifelike universe, running in parallel with the “real” world.

Augmented reality devices question the future of communication, and change the way we interact with all media. From gaming to advertising, the possibilities these groundbreaking optical devices lend stretch far and wide. Here are just a few that will redefine the way we play, buy and see.

On first impressions, you may think that Oculus Rift is the name of a character from “Transformers”; however, Oculus Rift is actually a virtual reality headset, designed for immersive gaming. Presented at the CES conference in Las Vegas, the Rift works as a 1080p OLE head-mounted display, which allows users to play with their body movements, as opposed to hand-controlled consoles.

The aim is to provide a realistic, intuitive experience, which makes the gamer feel like they’re living and breathing the game.

Popular with businesses and psychologists, SMI Glasses were developed by German company SensoMotoric Instruments. Using two small cameras attached to the glasses’ rim, these cutting-edge spectacles are able to detect where the wearer is looking, providing valuable insights to businesses.

For example, this technology is particularly relevant to advertising companies, who can use it to track how long a customer’s eyes linger on a particular ad. This analysis could shape the future of advertising, as businesses will be able to gather data on which product or ad draws the most attention, and optimise their offer accordingly.

Scientists at South Korea’s KAIST University have developed the K-Glass: a pair of high-performance, ultra-low-power head glasses, featuring many of Google Glass’s functions. The K-Glass is reportedly thirty times faster, and lasts up to three times longer than its counterpart; thanks to built-in augmented reality processors, it has the potential to duplicate the human brain’s ability to process visual data.

In comparison to Google Glass, the K-Glass offers a more seamless transition into augmented reality, suggesting that we’re one step closer to integrating real life and graphics.

Wearable optical devices currently allow us to check emails, take photos and play video games, but scientists have high hopes that, eventually, they will revolutionise our lifestyle.

Ever struggled to find something to wear in the morning? An augmented reality contact lens or spectacle could help you choose the perfect outfit. Can’t remember the name of the person who just waved at you? A state-of-the-art optical device could flip through your acquaintances like a filofax, and spare you the embarrassment of asking for their name (again).

The possibilities of augmented reality are truly endless, and suggest that the distant future is closer than we think.