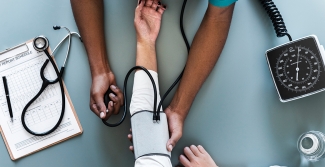 How diabetes affects your sight

Photo by rawpixel on Unsplash

Diabetes occurs when the body doesn’t produce enough insulin, or when the produced insulin is less effective than normal. The condition is lifelong and affects over 3.7 million people aged 16 or over in England, according to Diabetes UK.

The term ‘diabetes’ can refer to two main types of the disease:

Diabetes can affect many of the body’s major organs, often significantly reducing their effectiveness. So how can diabetes affect your sight?

Photo by Pixabay on Pexels

Diabetic retinopathy is a complication that can affect people with diabetes and is one of the most common causes of blindness among adults in the UK. It occurs when small blood vessels in the eye become blocked and start to leak, affecting your vision. The condition can get worse over time, and has different stages of severity:

Photo by Zhen Hu on Unsplash

Glaucoma is commonly associated with diabetes sufferers. One rare form, neovascular glaucoma, has been proven to have a direct link with diabetes. But scientists are still divided on whether the more common version, open-angle glaucoma, has a direct link with the condition. But it’s widely believed that the likelihood of someone with open-angle glaucoma developing diabetes is higher than that of a person without glaucoma.

Towards the end stages of diabetic retinopathy, the retina is deprived of oxygen and nutrients. This triggers the release of a chemical which stimulates the growth of new vessels within the eye, to provide the eye’s structures with nutrients. Neovascular glaucoma can occur if these new blood vessels grow on the iris (the coloured part of the eye), closing off the flow of fluid within the eye, increasing pressure and affecting vision.

Glaucoma can be treated through several different methods. Eye drops, surgery or laser eye treatment are all common solutions. However, early diagnosis is vitally important, as existing damage cannot be reversed.

A cataract occurs when the lens of the eye becomes cloudy. The lens is located directly behind the iris and allows the eye to focus the image that is then projected onto the retina.

While cataracts are not specific to diabetes, the condition is more likely to occur at an earlier age in people with diabetes. Studies have shown that people with diabetes are twice as likely to develop cataracts. They are generally treated with eye surgery, where the existing lens is removed and replaced with an artificial intraocular lens. The surgery is generally low-risk, and over 90% of cataracts operations have proven to be effective at restoring working vision.

Looking out for the symptoms of diabetes

These symptoms occur because some or all the glucose your body produces stays in your blood rather than being used as energy. Your body then tries to reduce glucose levels by flushing the excess glucose out through urine. It’s worth noting that not everyone gets symptoms – 6 out of 10 people have no symptoms when they’re diagnosed with type 2 diabetes.

Many people manage with type 1 and type 2 diabetes, and there are plenty of treatment options available to help. For more details and support, visit the Diabetes UK website.