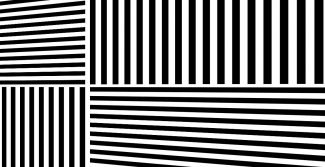 The optical illusion that can last for months

Warning: Lenstore strongly advises that you don’t try this illusion and accepts no liability if you choose to independently search for and view it. The complete illusion is not included within this article.

Known as the McCollough effect, this optical illusion is said to ‘rewire your brain’ and alter your perception of colour. Although it may sound tempting to try, it can cause you to see colours and shades where none exist for prolonged periods of time.

The illusion contains two colour gratings – one red, with horizontal black stripes and the other green, with vertical black stripes. To produce the effect, you must first look at a black and white test image. Don’t be worried about taking a look at this one, as it isn’t associated with any long-term effects on your vision. 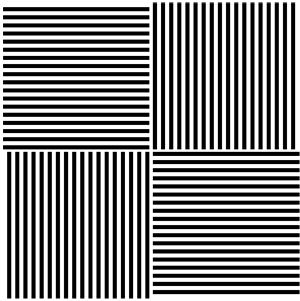 Once you’ve confirmed that the test image is just standard black and white, you’d then be required to stare at the two coloured gratings we mentioned earlier. It’s thought that staring for at least 10 seconds can leave a lasting effect on your vision for up to an hour or more. Turn that 10 seconds into 10 minutes, and it could last for more than three months – #NoThanks

What would I see?

Once you’ve looked at the image for a lengthy amount of time, you could start to notice a change in the colourless test image. A green haze should start to appear around the horizontal lines, whilst a magenta shade appears around the vertical ones.

The colours can vary in intensity between individuals, and in extreme cases, some people have reported to be able to see black lines completely coloured. The long-lasting effects of this illusion can prove troublesome when you’re reading or working on a project that requires good colour perception… Designers beware!

How is it different to other optical illusions?

Most optical illusions leave short-lived afterimages, meaning they typically only last for a few seconds or minutes. Some individuals that have been affected by the McCollough effect report that even by turning their head, or rotating an image upside down, the effect remains unchanged in orientation.

The full reasoning behind this effect is still unknown. It’s clear that it isn’t just simple neural fatigue; the brain is somehow rewired to associate dark solid edges with colours.

It’s a scary prospect that looking into this illusion can cause such an effect on your brain, so we’d just like to reiterate that this is probably something you shouldn’t mess around with. If optical illusions are your thing, why not check out our favourites? All completely safe, no brain rewiring included.