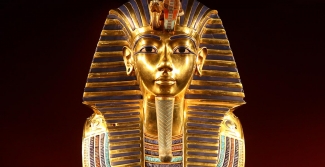 From King Tut’ to Twiggy; 3 summer make-up tips and their origins

For thousands of years, vibrant eye make-up has been worn by women (and some men) to transform looks, convey wealth and ward off evil spirits.

Not much has changed, as the make-up trends for summer 2014 consist of graphic lines, vivid blue eye shadow and pearly white kohl. In the spirit of these new trends, we’ve compiled a list of top looks, and their origins in history.

From Britney Spears to King Tutankhamun, some may even surprise you…

Inspiration for modern eyeliner came from the Egyptian desert, thousands of years ago. In 1922, the tomb of the ancient Egyptian King Tutankhamun was discovered in the Valley of the Kings. Alongside the precious gems and gold unearthed, archaeologists found cosmetics and make-up palettes, with their fragrance and colour still intact.

It seems King Tut’ was buried with everything he would need in the afterlife, as ancient Egyptian tradition dictates that eyes need to be lined with thick kohl to face Osiris, the god of the afterlife.

In daily life, kohl was also worn for aesthetic and spiritual reasons, and was traditionally made from a metallic mineral called galena. Eyeliner was commonly applied in an almond shape in reference to the eyes of the pagan god Horus, who was commonly depicted with falcon-like almond eyes.

Popularity of black eyeliner waned throughout the centuries, and it wasn’t until the 1960’s that ladies around the world began sporting eyeliner thanks to the iconic model, Twiggy. Known for her long legs and doe-like eyes, Twiggy achieved her famous look with lashings of thick black kohl and three pairs of false eyelashes .

Eyeliner remained popular in the following decades, and in 2014, kohl conquered the SS14 catwalks. From Stella McCartney to Missioni, models debuting the spring/summer collection sported exaggerated flicks, angular edges and thick lines. To recreate the look, combine your lines with a nude lip, minimal foundation and shimmering bronzer.

This summer, white eyeliner is one of the hotly tipped make-up trends; J. JS Lee models strutted down the catwalk with pastel outfits and bright white kohl, and at Kenzo, make-up artist Aaron De May ‘recreated the crest of a wave’ with a minimal slick of white eyeliner.

The ancient Egyptians used natural dye from plants and minerals to create coloured eye shadow, with the aim to enhance their look, convey wealth and protect their eyes from the glaring Egyptian sun.

Cleopatra, the infamous Egyptian pharaoh, is said to have worn deep blue eye shadow with golden flecks on her upper lids, made from ground lapis lazuli stones. Thousands of years later, bright eye shadow enjoyed a resurgence in popularity when cosmetics entrepreneur Helena Rubinstein began selling soft shades of blue in the 1950’s.

In the decades following, pop princesses and models alike have worn different shades of blue powder;  Cyndi Lauper sported blue eye shadow and encouraged girls to have fun in the early 2000’s, Britney Spears inspired thousands of girls around the world to team their Tammy dresses with blue eye shadow .

You’d be forgiven for associating blue eye shadow with 80’s disco divas and whacky pop princesses, but this summer, aquatic eye make-up has been reborn, with models from Marc Jacob and Anna Sui strutting the catwalk wearing vivid shades.

To recreate this look, combine a soft blue eye shadow with natural coloured contact lenses from Alcon, whose range of Freshlook Colorblends provide a subtle, but striking change to your look.  From the deserts of Ancient Egypt to the catwalks of Paris, gain inspiration for your summer looks with these ancient trends with a fresh new twist.