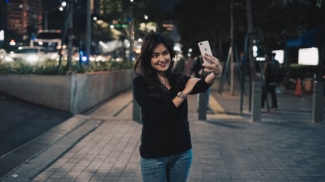 The Vanity Capitals of The World

Our increasingly digital world has resulted in us focusing more on how we look, leading us to turn to quick-fix solutions to hide our so-called imperfections from the rest of the world online.

If you have a smartphone, you can easily access apps that can smooth your skin, whiten your teeth and reshape your face. That picture-perfect look once reserved for celebrities is more achievable than ever before, and our society has become more appearance-focused as a result.

To see how self-obsessed we really are, Lenstore has analysed rating data from nine popular selfie editing apps across 37 countries to discover who turns to selfie editing apps the most. We also surveyed 1,348 people in the UK to find out more about our selfie-taking habits, why we turn to editing apps, and why we alter our appearance online.

South Koreans are the vainest nation with 57 selfie editing app downloads per 10,000 people 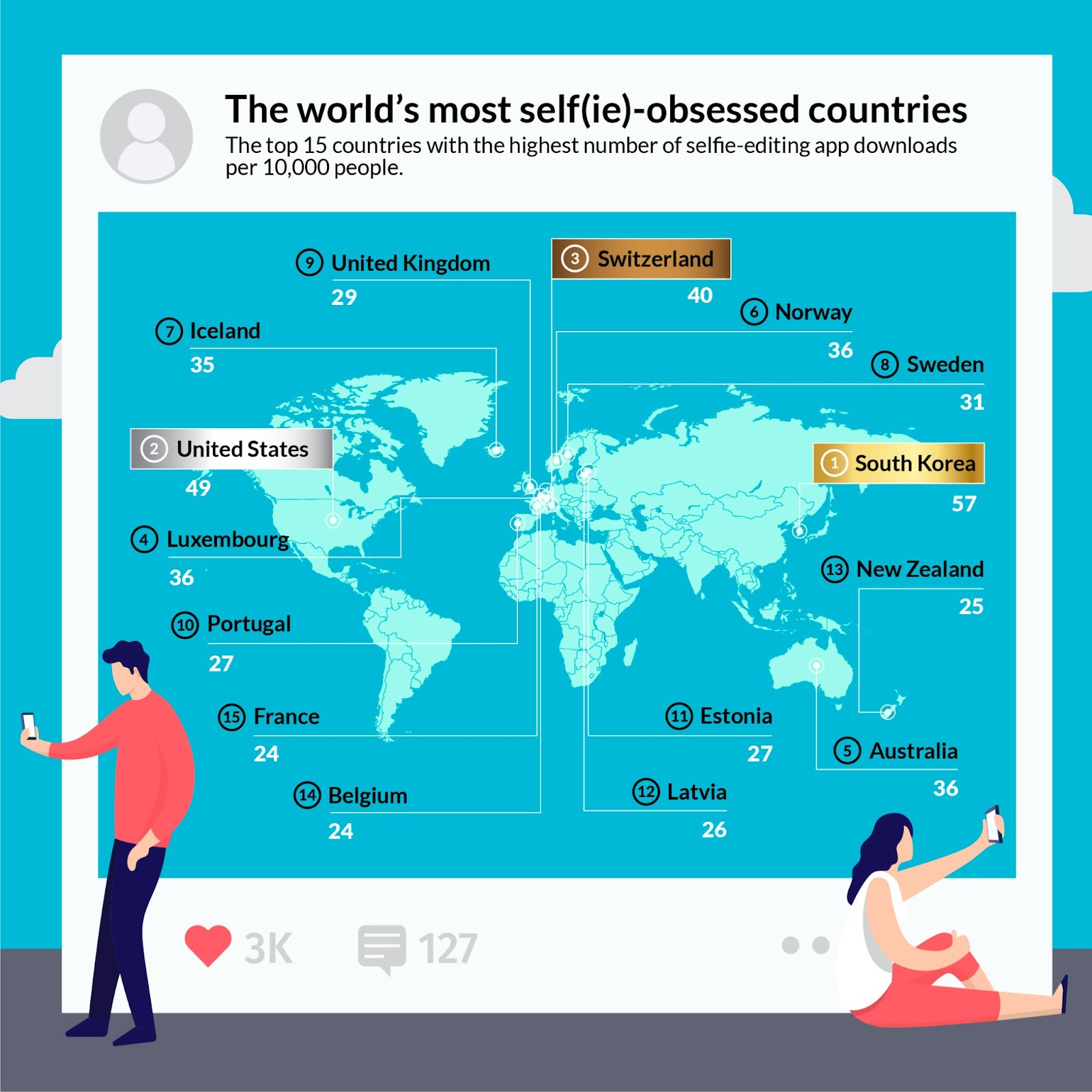 The United States follows as the second vainest nation when it comes to app downloads, with 49 per 10,000 capita. However, they have the most overall downloads for selfie editing apps topping 1.62 million. Americans are searching for these apps over 149,000 times per month, showing many are looking to edit their images before sharing them with the world.

Japan is the least vain nation with just one download per 10,000 people, following Poland with 10 selfies taken per capita.

Adobe Photoshop Express is the most favoured selfie editing app globally with over 1.5 million ratings 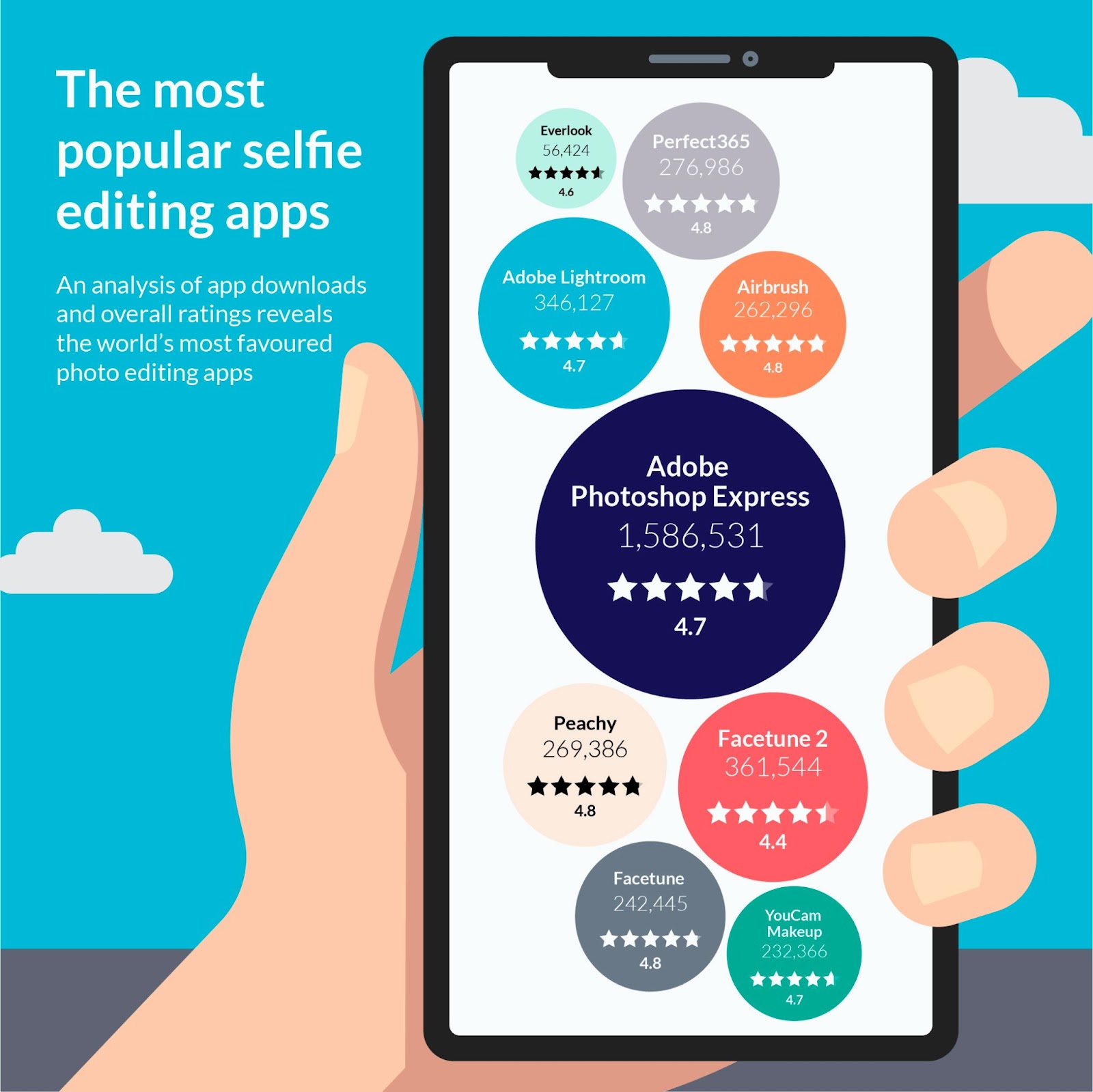 Adobe Photoshop Express is the most favoured selfie editing app with 1,586,531 ratings globally, averaging at an impressive 4.7 stars. This is possibly due to it being the free, condensed version of the famous Adobe Photoshop.

Apps developed for specific editing purposes prove popular with smartphone users. Airbrush, which allows you to hide blemishes and even out skin tone at the tap of a button, has 262,296 ratings averaging 4.8 stars. Other notable tools for touching-up selfies include YouCam Makeup, averaging 4.7 stars.

Despite being a hit with downloads and having a total of 361,544 ratings, Facetune 2.0 (which has a £9.99 per month subscription fee to access all features) averages the lowest at 4.4 stars.

Taking, editing and posting a selfie can take time to get absolutely right, and some spend a lot longer perfecting their image compared to others. 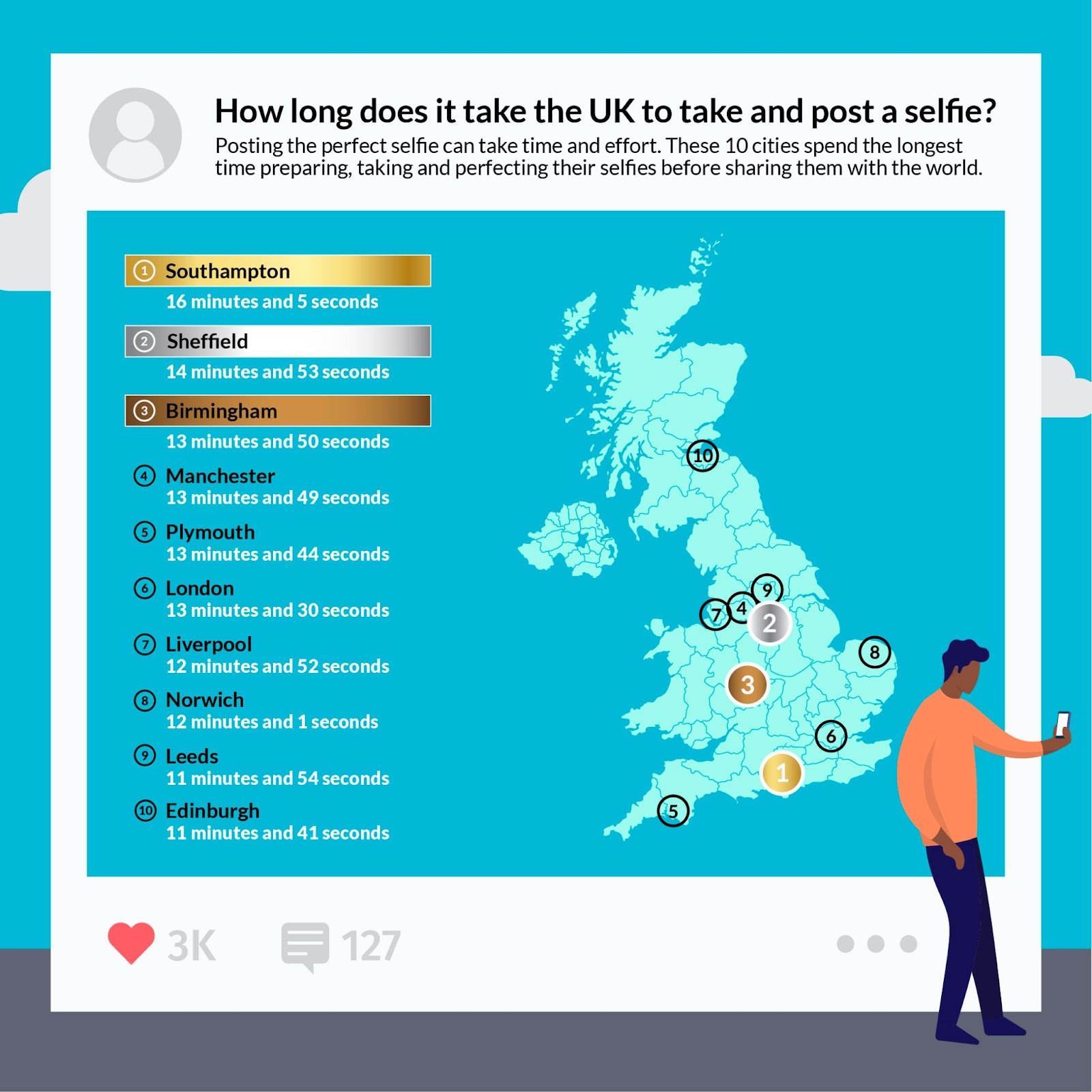 Our survey found that people in Southampton spend the most time taking and editing a snap of themselves at a staggering 16 minutes and 5 seconds on average. To put that into perspective, if the average person in Southampton took two selfies a week they would be spending 2 hours and 8 minutes every month. Over a year, that works out at just over 1 day lost to taking and editing selfies!

Over half of those in Southampton are reliant on digital editing, with over half (53.6%) saying they can’t post a selfie without hiding their imperfections.

Sheffield follows as the second biggest selfie-city with people spending a combined total of 14 minutes and 53 seconds on average taking and editing a single selfie.

One in two people from Sheffield feels they can’t post a selfie on social media without applying some kind of filter to enhance their image.

Londoners take 13 minutes and 30 seconds to take and edit their selfies, the same as a tube journey from Big Ben to the Bank of England in the capital. Meanwhile, those in Cardiff spend the least time on perfecting their selfies at 10 minutes and eight seconds on average.

Why are we really editing our selfies?

There are several reasons why Brits use editing apps to perfect their appearance in a selfie, from it giving us a confidence boost to making others jealous online. Coming out as the top reason with 48.3% respondents is that people take selfies to help them ‘feel less self-conscious’ followed closely by to ‘feel better about themselves’ with 47.9% responses.

While some individuals edit selfies to improve how they feel inside, others edit for the benefit of others with 47.7% doing so to ‘enhance their best features’ and 46% to ‘appear more attractive to others’.

Over half of men feel they can’t post a selfie without applying filters, compared to 43% of women

There is a misconception that women are more appearance-focused than men when it comes to selfies and social media, however, the findings show the complete opposite with 52% of men saying they can’t post a selfie on social media without applying a filter, compared to just 43% of women.

The survey also reveals that nearly 60% of men feel they can't post a selfie without specifically altering the shape of their face, compared to just 43% of women.

Both men and women go further than editing apps to alter their appearance, from minor changes to the more extreme. In terms of vision, one in 10 people wear contact lenses instead of their glasses for vanity reasons rather than practicality. Others receive non-surgical cosmetics for that real-life airbrush effect, with 17% of those surveyed in Birmingham turning to botox and filler!

Overall, it’s clear the increased availability of selfie editing apps has contributed to a more self-obsessed society with us (some more than others) becoming more reliant on digital effects before posting an image of ourselves online.

For this study, we gathered a seed list of the most popular selfie editing apps on Apple App Store to determine both downloads and app ratings per capita as of November 2021. For average monthly searches, we used Google Keyword Planner to find search volume in the year prior November 2021.