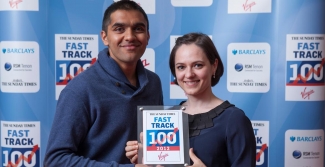 The 16th annual awards ceremony for the Sunday Times Virgin Fast Track 100 was recently hosted by Sir Richard Branson at his Oxfordshire home. The guests invited were the proud business owners of the 100 fastest growing privately owned UK companies, according to the Fast Track league table. Among them, Mitesh Patel and Olga Nuryaeva, co-founders of Lenstore which was ranked 10th last year!

Mitesh and Olga - Fast Track AwardIt’s a tough time for budding entrepreneurs, but this annual event is held to celebrate and encourage British business. Mitesh and Olga picked up the award for 10th fastest growing private company in the UK and it couldn’t have come at a better time, as Lenstore prepares to celebrate it’s 5th anniversary on the 11th June!

Mitesh got into a very stimulating conversation with Richard Branson over the failure of Virgin Cola. After asking him what his least successful business venture was, Richard Branson began to discuss how Coca Cola had pushed Virgin Cola off the shelves and out of the market.

They did this by offering major UK retailers extremely cheap Coca Cola for long periods of time, making Virgin Cola virtually unsellable. To tackle a market where there is already such a clear and prominent leading brand was a gamble that didn’t pay off for Richard Branson, and not one that he encourages to others.

He had a lot of other advice to share at the event, offering his invaluable expertise in an hour long Q+A session. One of the most memorable pieces of his advice was to find and fill a gap in the market that will improve other people’s lives, and to do it better than anyone else. This certainly rings true for Mitesh and Olga, who founded Lenstore to provide options to people in the UK as to where they can buy their contact lenses from.

In 2008, buying lenses online was becoming popular in countries such as Sweden, but remained relatively unheard of in the UK. In the past, most people had been tied into expensive direct debits with their Opticians, so Lenstore aimed to offer a more convenient option at a lower price. Since then, Lenstore has become the UK’s leading contact lens retailer with over 100,000 customers, and Mitesh puts Lenstore’s growth and success down to one factor – customer service.

“We began with a strong focus on keeping every customers happy, and I’m delighted that our “Every Customer Happy” mantra has remained intact. In fact, the focus on giving customers what they want has grown stronger over the years. It’s the only way to grow a business.”  Mitesh Patel, founder of Lenstore.

Mitesh and Olga were also conscious of ensuring Lenstore provides it’s customers the same level of professional experience that they would receive from their Optician. That’s why Lenstore has an in-house Clinical Team available 6 days a week to offer optical advice via phone, video conferencing or in person.