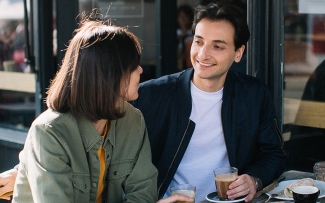 The truth behind first impressions

Whether it’s starting a new job, meeting friends of friends or going on a first date, it takes just a matter of seconds for someone to evaluate you when you meet them for the first time. But just how important are first impressions to us, and how do physical appearances have an impact on our opinion of someone’s character?

At Lenstore, we’ve surveyed 1,000 people across the UK to find out the truth behind first impressions. Finding out the biggest contributing factors when meeting someone for the first time and how this affects our perception in both a positive and negative light, as well as what physical attributes suggest certain personality traits. This study uncovers what we notice first when meeting someone for the first time.

The truth behind public attitudes towards first impressions

We asked respondents what the most important factors were in different environments, from a scenario in the workplace, a social setting and a romantic setting.

Unsurprisingly appearance ranks as the most influential factor when making a first impression in a work, social and romantic environment.

How do men and women compare when it comes to first impressions?

Whilst men and women both think appearance is the most important factor when meeting someone for the first time, particularly in a romantic setting where this bumps up from just under a quarter (24%) to 1 in 3 in a romantic environment (32%), there are some differences in the characteristics they value most.

In the workplace, women are far more likely to judge someone based on their clothing at 18% versus men at just 11%. However, for men, 1 in 9 admit weight is a contributing factor, compared to 1 in 12 women.

When it comes to meeting someone romantically for the first time, this is where some contrasts can be seen between men and women. With the importance of age almost doubling for both genders, going from around 15% to a staggering 28%, this remains a larger contributing factor for women than men (31% vs 25%).

Social media, the car or vehicle a person drives, their job title and financial position all rank as some of the least important factors for both men and women when meeting someone romantically for the first time.

The impact of first impressions on our personality perceptions

We wanted to find out our personality assumptions based on first impressions to see which physical appearances indicate certain characteristics.

The top three factors that we assume makes someone intelligent are:

With eye contact ranking top for indicating intelligence, it’s interesting to see one in six people (14%) also see smart clothes as an indicator of intelligence, as well as good posture.

Known for indicating intelligence, it’s unsurprising that over 1 in 10 people perceive people with glasses to be more intelligent. Interestingly, people see someone that is clean-shaven as significantly more intelligent than someone with facial hair (10% vs 4%).

The top three factors that we assume makes someone trustworthy are:

1 in 5 people see eye contact as a key indicator of trustworthiness, with women valuing this more at nearly 1 in 4. Along with smiling and good posture, 1 in 10 find that smart clothes and being clean-shaven also indicate a trustworthy personality.

The top three factors that we assume makes someone untrustworthy are:

Almost 1 in 4 find a lack of eye contact as a key sign of untrustworthiness. Other key attributes include a loose handshake and poor posture where an average of 1 in 10 people find this mistrusting.

The top three factors that we assume makes someone creative are:

Interestingly 1 in 12 people find glasses-wearers as creative, whilst piercings also make some of the top features of a creative person.

The top three factors that we assume makes someone confident are:

Just under 1 in 3 people see eye contact as an indicator of confidence and the biggest sign of this trait. 1 in 10 people find people that are clean-shaven and the smell of perfume or aftershave as a sign of confidence, whilst the lowest contributing factors are being overweight (3%) and having bad odour (3%).

When it comes to being shy, more than 1 in 3 people see lack of eye contact as the biggest indicator of this, followed by someone that doesn’t smile and has a loose handshake.

What attributes do we find more attractive than others?

Whilst everyone’s tastes are slightly different, the results show some clear patterns in what we find the most attractive when it comes to first impressions.

The results show there is a clear trend in certain characteristics such as being clean-shaven, wearing smart clothes and having good posture that contributes to making someone more attractive. Whilst facial hair, avoiding eye contact and wearing casual clothes are considered less attractive attributes.

Just 6% of respondents found piercings and tattoos as attractive qualities, whilst heavy make-up, an overly dominant handshake, and plastic surgery also ranked as some of the lowest factors.

Height is clearly considered an attractive feature, rather than men, with over 1 in 10 women considering tallness to be attractive, compared to less than  4% of women finding a shorter height attractive.

Whilst everyone is different, it’s clear to see those first impressions really do matter.

When someone looks you straight in the eye, they project confidence, reliability, and the fact that they probably like you!

Better yet, if the person in front of you has a smile in their eyes, that character comes across as genuine and likeable.

(It's worth practising this one in the mirror since you rarely get a second chance to make a first impression.)

Shy people often stare downwards, glancing up here and there, but not committing to full eye contact. That tendency can be attractive to many - and can also show a person who wears their vulnerability on their sleeve, aware of their shyness but not apologizing for it, which is very genuine. It's a quietly intelligent way of dealing with the world.

The flip side of the downwards-glancer, is the upwards peeper, those chirpy souls who make positive eye contact, but every once in a while look up, for inspiration and ideas, searching for the next fun thing to say. Here you're dealing with a positive person who's always ready to praise and celebrate.

The gold standard, most attractive pattern, which shows emotional intelligence and honesty, are those who mix it all up - smiling eyes, lots of eye contact, a bit of staring down if discussing difficult issues, lots of upward eye flicks to focus and keep the conversation going.”