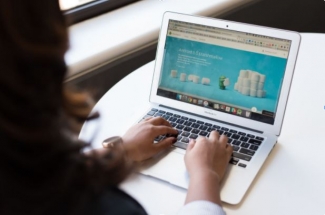 For most of us, the internet provides almost unlimited access to all the information, products and services we could possibly need. However, there are still many people who struggle to access even the most ubiquitous sites on the web.

Often, visually impaired users have various requirements in order to browse online. Therefore, with over two million people in the United Kingdom alone living with some form of sight loss, websites that do not fulfil these requirements are disabling access to a large proportion of our community.

But which websites provide the most and least accessibility for those around the world living with visual impairments? Lenstore analysed 90 of the most popular online platforms to find the answer.

Lenstore has created their own unique index as part of their Website Accessibility Report. It ranks each site’s performance on a scale of 1-10 across various factors such as contrast, anchor text, empty headers and text—all of which can make accessibility difficult for visually impaired users. An overall ranking has been provided based on their cumulative scores to determine the most and least accessible websites.

PayPal ranks top of the 10 most accessible websites with a near perfect 9.9/10 score

Of the 90 websites studied, PayPal was one of three that achieved a near perfect score of 9.9/10 in Lenstore’s website accessibility report. Studying the amount of contrast errors, empty headers, and null, missing or empty alt text across the website, PayPal scored perfect ten out of ten scores.

The overall ranking was brought down only by some text issues; 5 of these were identified on the website meaning it received a 9.96 score in this section when compared against other sites.

The text that resulted in accessibility issues with PayPal included adjacent links that go to the same location which results in additional navigation and repetition for screen reader users, as well as the use of PDFs which provide accessibility issues.

The other websites that scored 9.99 out of 10 were health provider Alodokter and financial service experts Spectrum.

The Daily Mail’s incredibly popular online news platform, the Mail Online, was found to be the least accessible website in Lenstore’s study. It scored the lowest overall number, just 5.39/10, after an analysis of their use of contrast, headers and anchor text.

Very low contrast between text and background colors can create myriad problems for users with low visibility, and there were 60 errors of this nature on the Daily Mail’s website.

Arts and entertainment platform Soyetsu ranked second to bottom in Lenstore’s website accessibility study with a score of 6.30/10 having discovered over 830 issues with their on-page text. Social media platform Line was the third lowest with a 7.26/10 score due to its poor use of alt text.

Unsurprisingly, the health sector is leading the way in website accessibility. Of the 14 major websites studied in this category, there was an overall average score of 9.86/10.

The aforementioned Alodokter may be the website with the most accessibility out of those studied, however, the CDC, the Center for Disease Control and Prevention which is the national public health agency of the United States, ranked closely behind it.

The CDC scored perfect 10s in every category other than its on-page text. There was found to be some ambiguous text, text that did not make sense out of context and extraneous text (such as "click here") that can cause confusion for users with accessibility requirements.

The Daily Mail, which scored lowest overall in Lenstore’s website accessibility report, was not the only news platform that may require some improvement. The media industry had the worst overall performance in the study with an average rating of 9.21/10.

Most of the websites included in the study were able to score over 9/10 including the New York Times, The Guardian, BBC News and USA Today, the latter of which ranked highest overall with 9.89/10. However, The Sun’s website brought down the overall average, ranking only two points higher than the Daily Mail.

The Sun had 128 contrast errors which could result in visually impaired users being unable to read parts of the website, whilst there were 416 additional text errors related to the website’s structure, links and headings that caused accessibility issues.

The social media platforms offering the most and least accessibility

Facebook Messenger was found to be the most accessible platform for users with visual impairments. Aside from a very small handful of contrast errors and issues with anchor text, both of which can cause confusion for screen readers, the instant messenger scored perfect 10/10 scores in almost every category. Overall, Messenger scored 9.98/10.

But what of TikTok, arguably the most trendy social media platform at the moment? TikTok was found to be the 6th most accessible social site, beating its competitors Facebook, Twitter, LinkedIn and Instagram. It scored high marks across the board in Lenstore’s report with an overall grade of 9.86/10.

The full data can be found here.