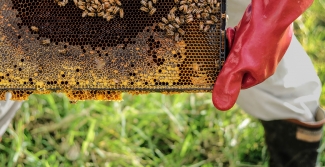 Photo by Danika Perkinson on Unsplash

Bees are very important to our eco-system. Without them, around 70% of the world’s crops would fail. These important little critters buzz around by beating their wings 200 times a second and are the only insect that produces food we can eat – honey! But their eyes are a fascinating feature.

Photo by Boris Smokrovic on Unsplash

If you’ve ever been brave enough to get up close to a bee, you may have noticed three black dots on the top of its head. These are eyes! Who knew?

As well as two large eyes either side of its head, a bee has three ‘simple’ or ‘ocelli’ eyes on the top of its head. These detect light (but not shapes), meaning that a bee can sense if it is being approached from above by a predator.

The two large eyes either side of its head are made up of lots tiny lenses that each piece together a wider image of what the bee can see - this is known as a compound eye. They specialise in seeing patterns, which can help identify plant types and other bees.

Photo by Philipp Pilz on Unsplash

Strangely, bees’ two larger eyes have tiny hairs growing on them. It is believed that the hairs detect wind direction, so they can navigate in windy conditions.

Photo by Harrison Broadbent on Unsplash

3. Bees use the sun to navigate

As well as their hairy eyes, it is thought that bees also use the sun to navigate. They can see polarised light (light that has travelled through a filter, such as clouds), which means they can see the sun, even if it’s very cloudy.

Photo by pierangelo bettoni on Unsplash

A field of flowers might seem still to us humans, but bees are likely to be able to see them swaying in the smallest breeze. That’s because bees are very sensitive to movement, even if that movement occurs in 1/300th of a second. Humans can only detect movement happening for longer than 1/50th of a second.

Photo by Aaron Burden on Unsplash

Bees can see some colours, though they have very different colour vision than humans. Their eyes are more sensitive to blue and purple. Bees can see ultraviolet light, which is advantageous as flowers reflect large amounts of ultraviolet light. This makes flowers look very bright against their surroundings and very appealing to a bee!

It is thought that bees’ favourite colours are purple, violet, and blue. This might explain why ‘bee-friendly’ flowers, such as lavender and forget-me-nots, tend to be these colours.

…bees dance to show each other where food can be found? Food close by is indicated by foraging bees through what’s known as a ‘round dance’. Not particularly complicated, a scout bee’s ‘round dance’ consists of loops in alternating directions. When food is further away, a scout bee conducts a ‘waggle dance’. This involves the bee flying in various directions, depending on where the food can be found in relation to the sun.

Why not plant some bee-friendly flora today, to make the humble bee’s job a little easier?