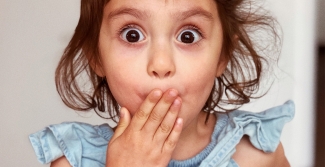 8 surprising facts about our eyes

Although we heavily rely on our vision, most of us know very little about how we see the world around us. Over time the human eye has evolved to become our second most complex organ. Even before we are born, we can differentiate between light and dark.

But humans are not the only ones with amazing eyes! There’s plenty of interesting things to learn about the eyes of animals. From eyes in the highest point in space to the darkest depths of the ocean there are all kinds of surprising facts that you may not have even thought of. Have a look at our infographic and find out about our 8 surprising eye facts.

1. Due to lack of gravity in space, an astronaut cannot cry

In space there is no gravity. This means that if an astronaut feels sad and starts crying, their tears cannot run down their face. Instead, a ball on the face is formed and, eventually separates from the eye and drifts around.

2. Your eye is the fastest muscle in your body

Have you ever heard the phrase "in the blink of an eye"? This saying originates from the fact that a blink lasts 100 - 150 milliseconds. The average person blinks between 15 - 20 times per minute.

Although a baby can tell the difference between light and dark inside their mother's womb, once born, they can only see a distance between 8 and 12 inches.

4. An ostrich's eye is bigger than its brain

Ostriches are not the only animals that need to steer clear of predators. As a grazing animal, a goat needs to be fully aware of predators and see any oncoming trouble. A rectangular pupil helps it to see in an area of almost 360° degrees.

6. Dolphins can move each eye independently

Dolphins’ eyes are laterally placed and act independently. So, unlike human eyes, which are working together to enable vision, one eye of a dolphin can stare at something while the other eye is not focusing on anything.

7. Goldfish have no eyelids

As goldfish have no eyelids, they can’t close their eyes. Meaning that they must sleep with their eyes open. Also, goldfish can see more colours than humans.

8. The largest eye on the planet belongs to the Colossal Squid

The Colossal Squid is well equipped for life in the deep blue sea, with eyes as big as a human head, measuring around 27cm across. A big eye helps them see and catch prey and stay away from predators.