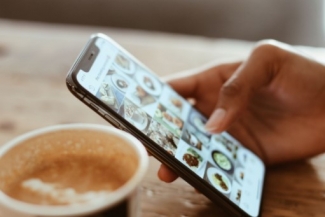 How long do Brits spend scrolling through their phones?

As a nation, we spend an eye-watering amount of time scrolling through our phones, with one poll suggesting our screen time has increased by 49% during lockdown. Recently, ‘doomscrolling’ has also been on the rise, which according to Merriam Webster, is the tendency to continuously scroll through bad news, even though that news is saddening, disheartening, or depressing. This has increased awareness of how our scrolling habits could be damaging far more than just our eyes.

Lenstore has surveyed 1,000 UK adults revealing that Brits spend three hours scrolling through their phones every day on average, amounting to 46 days each year.

But is scrolling just a way to pass time or are we addicted to our daily screen time dose? To investigate the truth behind our scrolling habits, Lenstore has revealed the apps we scroll on the most, their emotional impact, and the psychology behind why scrolling can be so addictive.

Whether it's while you're watching TV, eating breakfast or on public transport, many of us are guilty of scrolling on our phones multiple times a day, with the average Brit scrolling for three hours daily. However, taking a deeper dive into our screen time habits, it was found that 19% of individuals admit to spending over five hours per day scrolling, while 6% of individuals spend between seven and eight hours - the equivalent of an average working day.

Age also appears to play a significant role in the duration we spend scrolling. It was found that Gen Zs are the generation that spends the longest time with 18% admitting to scrolling for between seven and eight hours per day and 7% scroll for over eight hours.

The average number of hours Brits spend on their phones each day is broken down below: 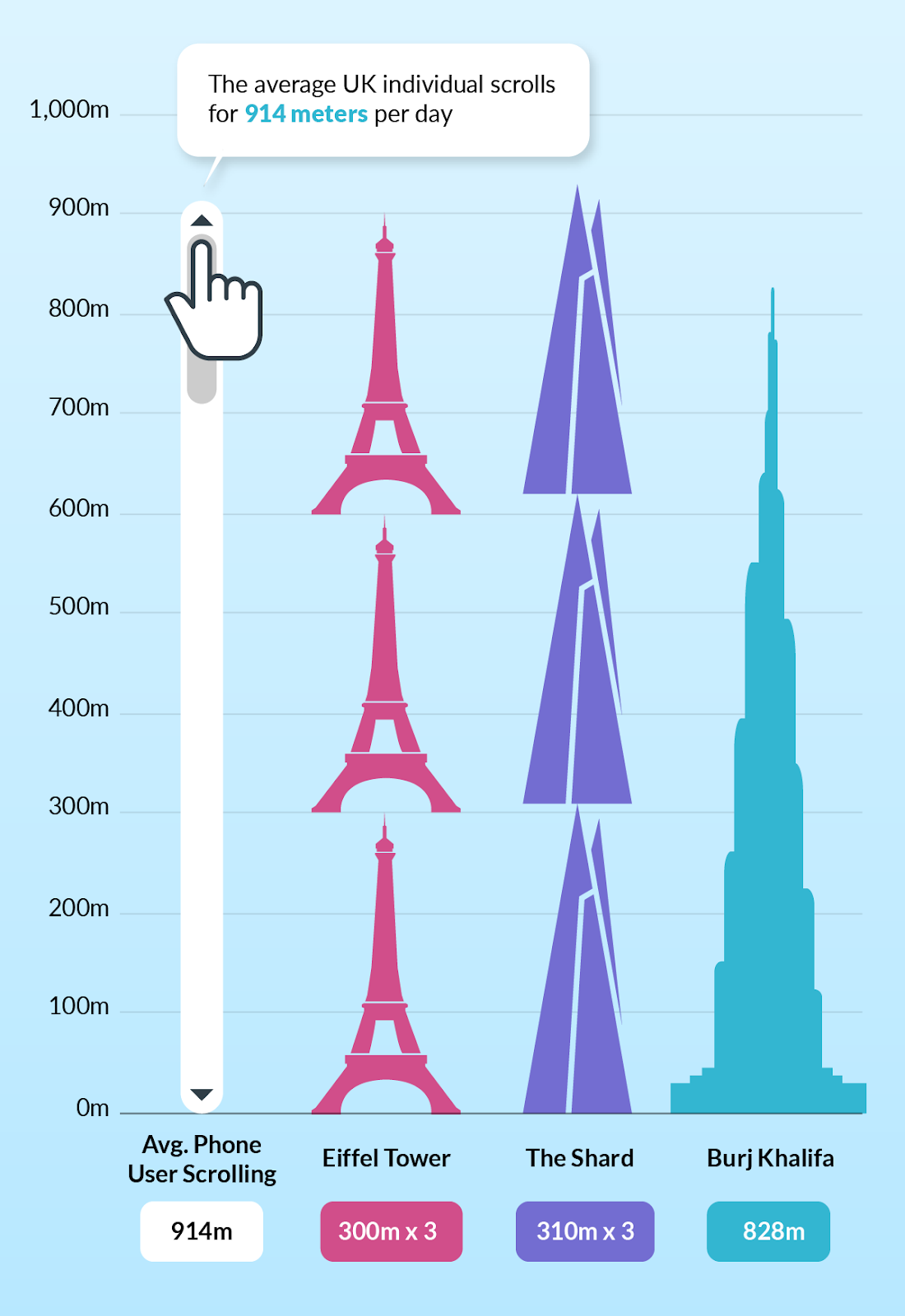 Shockingly, Brits were found to scroll the equivalent of 914 meters on their phone every day. When comparing this to famous worldwide landmarks this equates to three times the height of the Eiffel Tower and almost three times The Shard. Annually, Brits scroll the distance of travelling from London to Manchester - an astounding 333,610 meters.

The European countries that scroll the furthest each day

Scrolling for a total of 965 meters every day, Romania tops the list of European countries that spend the longest time scrolling. Some of the other countries most addicted to scrolling included Poland (767m) and Portugal (746m).

As the world appears to be addicted to their phones, it’s important to check in with your overall health, from ensuring you are not suffering from dry eye, particularly as a contact lens wearer where this is more common, to checking in on your mental health, to ensure you and the others around you are ok.

When do we find ourselves scrolling the most?

Our survey took a deeper look into the specific scenarios where we find ourselves scrolling through our phones most frequently. Scrolling while watching TV was found to be the most common (48%), closely followed by before you fall asleep (46%) and whilst having breakfast (41%).

Shockingly, 5% of singletons admitted to scrolling through their phone while on a date, along with 13% who scroll through their phones with friends and 10% while eating out at a restaurant. Our scrolling habits go far beyond just our bad table manners with 31% of Brits admitting to scrolling whilst on the toilet and 8% immediately after having sex.

News apps have the biggest negative impact on our emotions

‘Doomscrolling’ first gained recognition in June 2020 when we were in the early stages of the COVID-19 pandemic The term has since gained momentum with the phrase still receiving over 27,000 worldwide searches in November 2021, and leads to no surprise that news apps were associated with the highest volume of negative emotions, according to our survey. These apps ranked the highest for emotions such as feeling depressed, worried, and anxious.

When analysing social media apps, Facebook ranked first with the highest number of respondents saying the app made them feel depressed and anxious. While Instagram was the app associated the most with feelings of jealousy.

The apps that had the greatest positive impact on our emotions were shopping apps which topped the ranks with 32% of participants saying scrolling made them happy, 20% inspired and 15% confident.

The survey revealed that 51% of participants describe themselves as addicted to scrolling through their phones. Scrolling addiction seemed to increase depending on which generation you were born in with 86% of millennials and 82% of Gen Zs experiencing scrolling addiction compared to just 42% of baby boomers.

Although our scrolling habit may provide us with some light entertainment, extended periods of screen time has been associated with conditions such as tired eyes and fatigue. 55% of survey participants said they have experienced tired eyes when scrolling through their phones, while a further 42% admitted to continuing to scroll even when they experience eye strain. For expert tips on how to reduce eye strain caused by scrolling see our eye yoga post.

Why is scrolling so addictive?

‘When you post an update on social media which receives engagement you are instantly hit with a shot of dopamine. Dopamine is one of the brain's neurotransmitters which helps send emotional responses to the body and see rewards. The body then takes action towards rewards. When it comes to social media, likes and comments are the ‘rewards’ that can become extremely addictive, leaving us endlessly scrolling without even being aware of it.’

Rebecca suggests the following tips to reduce the time you spend scrolling through your phone:

1. Check your phone at allocated times

Setting an allocated amount of time to scroll through your phone is an extremely effective method of cutting down your screen time. By doing so you will become much more present both with yourself and the people around you.

2. Turn off your notifications

This tip may seem obvious but reducing the constant stream of notifications that get sent to your phone is an important step. Taking some time for yourself away from your phone can be a great way to reconnect with your surroundings.

3. Leave your phone in a different room

For some, turning off their notifications may not be enough to keep themselves away from their devices. Creating some distance between you and your phone is important especially when you are spending quality time with a loved one, by doing so you make space for real connections and conversations.

This will not only help with the habit and amount of time that is spent on scrolling but also help reduce any negative impacts social media may be having on you.

With all of this considered just how bad are your scrolling habits, and do we truly appreciate just how long we spend scrolling through our phones?

The data collected in this study was based on a survey of time spent scrolling through mobile devices. The survey took place in December 2021 and questioned 1757 smartphone users in the UK.

The data collected on scrolling distance was created by using the following site’s methodology.

We took the average screen time spent on mobile devices from a previous Lenstore study to generate the results for each European country. The average scrolling time in the UK was generated by survey data.