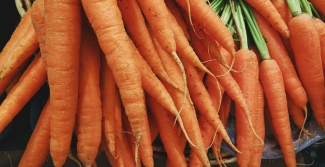 Myth or Truth: Can carrots help us see in the dark?

As children, we often were told off by our parents for not finishing our vegetables: “Eat your carrots, they’re good for your eyes!” But is it true that carrots improve our eyesight and help us to see better in the dark? Unfortunately, this is only partly true. Carrots can improve our vision at night, but won’t help us to see in complete darkness. So where does this myth come from?

During the Blitzkrieg in World War II the biggest threat to Great Britain was the frequent bombing night raids by the German army. Therefore, the British had to devise a plan to beat the German Luftwaffe. The British Air Force finally managed to repel them by successfully detecting German aircrafts and bombers on dark and foggy nights. How did they do it, though? – Carrots! At least that’s what the British made the Germans believe…

The story was created by the former UK Government’s Food Ministry to cover up the radar stations that were set up to pinpoint German bombers at night-time – a feat that was previously thought impossible. Through propaganda campaigns the Brits convinced the Germans that the excessive eating of carrots improves vision in the dark. From that point on, the orange root vegetable was an essential ingredient in the British diet and children were even given carrots on a stick as a wartime ice lolly alternative.

Photo by Rodrigo Rodriguez on Unsplash

So, do carrots improve vision in the dark?

Despite the myth, carrots are rich in vitamin A, which is important for good vision, as it helps the eye to convert light into a signal that is sent to the brain, helping to make us see in the dark. If someone suffers from a vitamin A deficiency, this may cause night blindness.

However, eating carrots may not improve the eyes of an ordinary healthy person and only make a big difference for someone who suffers from a vitamin A deficiency. Usually, eye problems derive from diabetes or are age-related and cannot be cured by eating carrots. Aside vitamin A, other nutrients like zinc, vitamin C and E, omega-3 fatty acids are essential for healthy eyes. We can say that the assumption that carrots can improve vision in the dark is half myth and half-truth.